For almost last 7 days we’re experiencing TERRIBLE fog here in Sarajevo. It’s thick, it’s filthy, it’s non-stop, literally non-stop. It does not get better by night, there’s no wind to blow it away, whatsoever, nor there are any precipitations.

Hence, on Saturday, my family and I decide to leave the city for few hours and headed for Bjelasnica (a mountain nearby Sarajevo). As we were driving up the mountain, the fog suddenly cleared up, and we saw blue skies and the sun for the first time in days. There was no a single cloud in the sky, and below us… 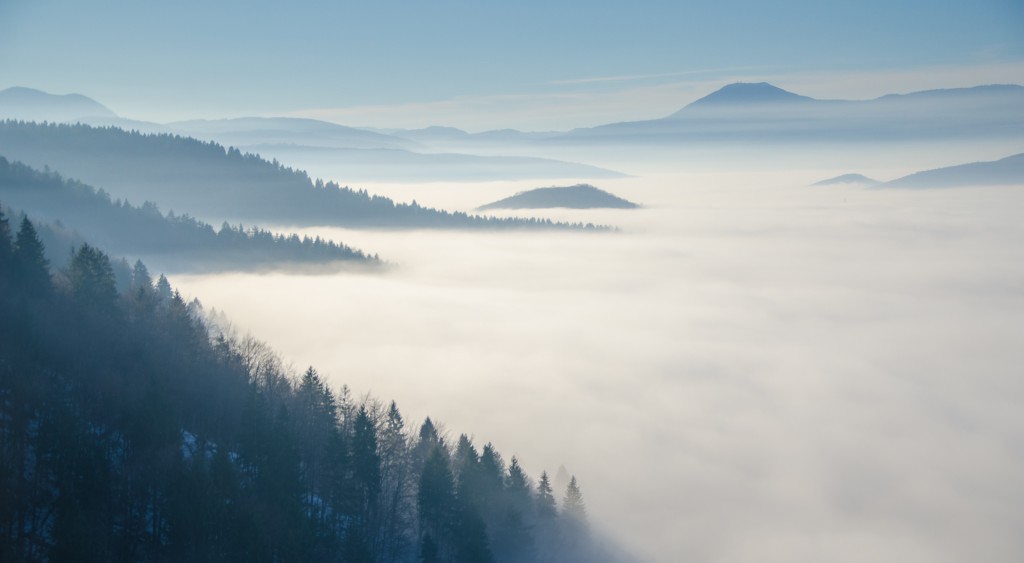 Fog over Sarajevo looked like a sea of cotton with hills and mountains emerging like islands. It’s such irony how something that beautiful can be that harmful to people’s health.

Anyways… We enjoyed our day in the sun, having fun, enjoying the view and playing with kids. At one moment, I looked at the Summit which is clearly visible from Babin Do, where we were at the moment, and I thought of the adventure I unexpectedly experienced about 7 years ago.

My friend Armin and I wanted to summit Bjelasnica in December 2008, and we wanted to do that by following skiing tracks. Now, you’d expect we would summit the mountain by hiking, considering people are skiing down that particular side.

We couldn’t have been more wrong.

Ground was already covered in snow, but there was not enough of it for skiing, so there was no danger of us colliding with someone. Our ascent was really smooth and fairly uneventful at the start. We were pausing every now and then to enjoy the view and then we’d move on. Our luck was about to change though.

As we were approaching the last ranger’s cabin, we entered clouds. Visibility was declining rapidly and by the time we reached steepest part of our route, the last few hundred meters below the summit, it was no more than 15-20 meters. Also, wind was blowing so hard we had really tough time staying on our feet. Regardless we decided to soldier on, as we were really close.

I should probably mention we almost did not have any safety gear with ourselves, because as I already said, we expected our undertake to be a simple hike. So we did not bring ice axes, ropes, harnesses, nothing. I did, however, bring crampons, and they were in my backpack.

Fast forward to two of us fighting the weather. As we were approaching the summit, when we were at the eyesight’s reach of it, wind got so bad we had to lay down on the ice. Surface under our feet was completely frozen and really slippery. We were climbing up a ridge and did not have any feeling what’s on either side of it. If we have slipped, we’d tumble down the mountain for at least couple hundred meters, and if the wind would have blown us on either side, we did not know what to expect. Hence we decided to wait in the snow. And snow was getting deeper and thicker every second and covering us more and more.

After laying down for maybe 10 minutes the wind had weakened a bit, so we decided to try climbing down, because moving forward was now a life threatening. I backed my self into half-sitting position as I still did not dare to actually sit up, and I somehow slung my backpack in front of me. I reached for the crampons, but I pulled out left one. Now, I was leaning on my left side and it was really impractical for me to first put on a left one. So I reached for the right one. As I was doing that, my left crampon got blown away, and then it fell down the mountain.

I grabbed onto the remaining crampon and fastened it to my right foot. Then I turned myself so I was facing the mountain and then started climbing down. However, my friend did not have any crampons so I had to think about way of getting us both to safety. So I used the crampon to anchor myself, and then I’d hit the ice repeatedly with my boot so I’d dig a hole in which he will be able to put his foot in, and use that as a ladder.

We were climbing down like this for just about couple hundred meters, but it took us an hour or two. I lost track of time.

We made it back to safety in one peace and with no injuries, and hopefully smarter than before, so we’d never again underestimate the mountain this way.

I actually have few more things to mention in this week’s blog, but it would get too long. You should check video with this article, I covered everything there.